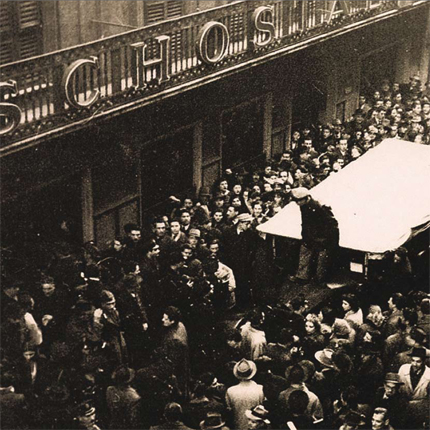 It just celebrated his 150th birthday. It opened in Via del Corso in December 1870, just after the breach of Porta Pia. It was named “To the city of Vienna, Schostal”; this last name, being a northern, mittleuropean name, was captivating, but the chosen position was also strategic. Within the centre of morning shopping and afternoon walking.

When, at the end of the 19th century, ladies needed white or coloured stockings, made out of cotton thread, wool or silk, or they needed petticoats or corsets or bonnets, it was inevitable for them to stop at Schostal’s women’s lingerie department. Stockings prices fluctuated between L. 2, for cotton stockings, and L. 22 for silk ones; with L. 350 you could buy the cheapest bridal trousseau.

These and others articles are contained in a catalogue that the director, then owner of the shop, Lazaro Bloch, distributed to his most affectionate clients and that today is a precious source of inspiration.

About men’s shirts, you can read that the shop was wellstocked. Those made out of true shirting cost from L. 5,5 to L. 10, while the shirts in batiste cloth, hand-embroidered, could cost more
than L. 30.Beside shirts, accessories were sold:
collars, cuffs and “fronts”.

Ties were white and cost L. 1 each. Prices were fixed, and this was unusual for the times. Home delivery was provided for, also out of town, and boxing and packaging were free; if you were not satisfied by the articles you received, you could return them and they were changed.

If the name of the shop was Austrian (it was the name of two Austro-Hungarian Empire’s subjects, Leopold and Guglielmo Schostal), Lazaro Bloch was from Turin and his religion was Jewish.

Together with other three employees from Vienna’s firm, around 1870 he established a company which took over Schostal’s numerous Italian branches, the last three in Rome, Naples and Palermo.